A complete overview of what software developers do, their different profiles, how to become one

Subscribe to my newsletter and never miss my upcoming articles

In this blog I'll explain about different kinds of software developers and what they do, how they are classified by their seniority🧢. Their rates💸 and salaries and how to become one. So, without further ado let's move on.😊

Software Developers(AKA programmers, coders or software engineers) test and develop software. Like goldsmith, butchers, toy makers unlike this job title becomes pretty self-explanatory. But that presumption wouldn’t do justice to the huge variety that the umbrella term ‘software developer’ covers.

In 2021, the demand for the software developers becomes double. There is a huge and growing variety of different kinds of software out there which ultimately runs on hardware. There is the application software we are most used to interact with consumers and professionals. There is system software that forms the layer between hardware like smartphones and laptops that application software runs on. There is embedded software which is essential to electronic devices from household appliances to cars and robotics. That's just three categories of the different kinds of software designed and coded by software developers.

🍁What exactly does software developers do? 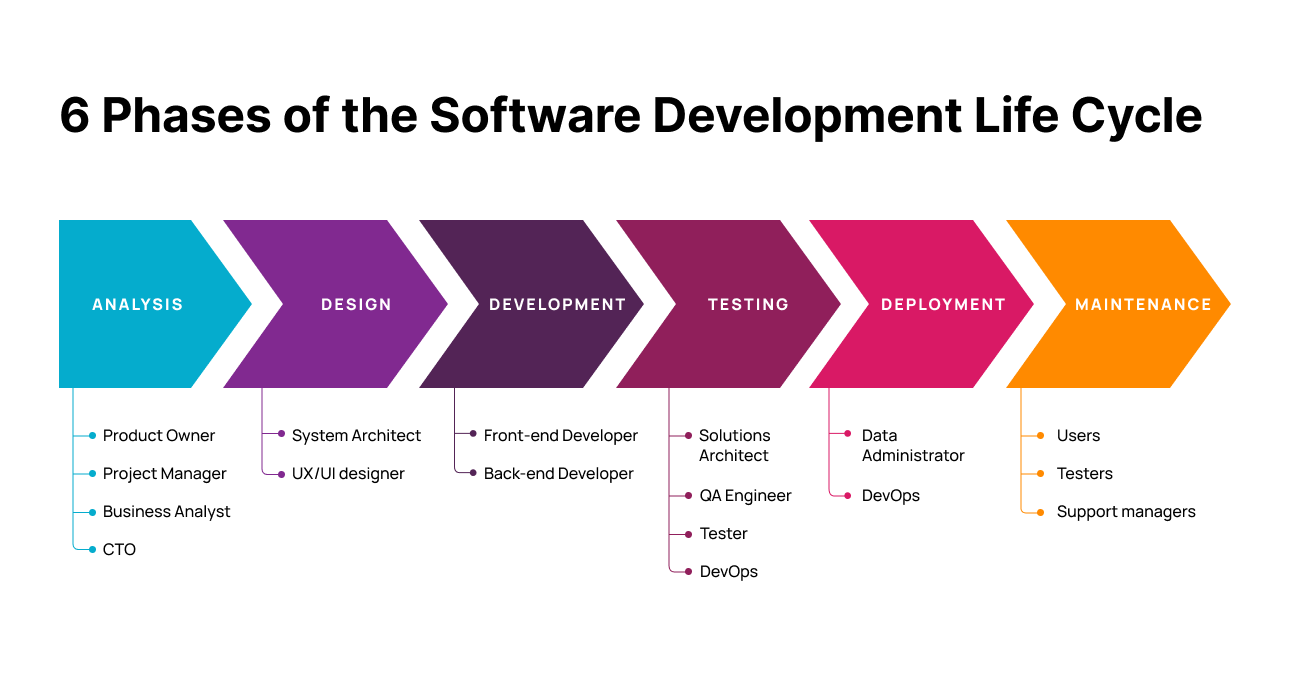 With some variation depending on the methodology and framework chosen, the software development process follows six main life cycle phases:

Software developers mostly contribute to the software development phase, which is were the actual code is written. Other kinds of IT specialist are responsible for most of the work involved in the other five phases.

Software developers are the member of the who implement the high-level plan set out by the architect. They do the actual work of building the software by writing the code and bringing it all up together as a working piece of software.

🍁Different kinds of the software developers

Software developers don't just come in the different levels of seniority but also across a wide range of programming languages and technologies. They are referred to as "tech stack". Examples are MERN and MEAN.

Different programming languages and technologies frameworks, libraries and software development tools are used in different kinds of software and the different parts. eg. the front end and back end of software.

Some of the main categories of software development are:

Software applications range from computer games to the SaaS products, enterprise portals and simple websites to native applications designed to run on a particular operating system like Windows, Android or iOS.

Application software can be quite straightforward, like a Single-Page Application(SPA) involving a frontend and a simple CMS on the backend.

Frontend developers code the user interface of the software application. The main part in which the user sees and keep the user interact more with the website. In 2021, JavaScript and JavaScript frameworks like React and Angular became the most required skills to have in Frontend software developers but there is a still demand for many others too.

Backend developers code the infrastructure that the user interface is laid on top of all the elements that power the application the user cannot see and relate to functionality, CRM, databases, systems integration, core logic, hosting and security.

The complexity and depth of the application can vary hugely from the straightforward infrastructure behind the Single-page app to cloud-native architecture, database engineering and integration with wider systems that connect different software products.

Java, Python, Node.js, SQL, Bash/Shell, Kubernetes, Docker and Rancher figure among the most currently in-demand back end developer skills. The most used back end database technologies are mySQL, PostgreSQL, SQLite and Mongo DB.

Full stack developers can do both frontend and backend and can code a whole app or take on both UI and infrastructure tasks Stack Overflow’s 2021 Developer Survey shows full stack developer is the most common role.

Mobile developer can also be front-end, back-end or full stack developers. They are specialized in technologies in mobile developer either native or cross-platform.

Cross-platform mobile apps runs on a browser and the popular technologies are React Native, flutter and Ionic. Native mobile apps are specifically runs on android or iOS operating system.

Swift and Objective-C are the technologies widely used in iOS development, complimented by UIKit and SwiftUI. Java is the most common language used in kotlin, alongside with UI frameworks like Android UI and Jetpack Compose. Android Studio and Android Developer Tools(ADT) are the most common Android toolsets.

Software developers according by Seniority can be broken down into four main categories:

The work of the lead software developer is to take the decision on how to best execute architect’s high-level requirements within the framework provided in a way that can be loosely compared to the role of a structural engineer. The lead developer will also usually be responsible for taking a final decision on any debates around the best technical solution to meet requirements.

Senior software Engineer can solve complex coding challenges. Senior developers are often responsible for mentoring mid-level and junior colleagues as well as assessing the quality of their work and intervening when necessary.

Mid-level developers are proficient professionals able to code independently but have a level of expertise and experience that falls below that expected of a 'Senior' colleague.

They have 1.5 to 3 years of full-time development experience and are able to independently handle a majority of development tasks using tech stack they have experience in.

Junior software developers are in the early stages of learning their trade. A junior developer will have basic to lower-intermediate fluency in writing code in at least one programming language and framework and foundational computer science knowledge.

They are given simple, odd jobs and low-level coding work to build experience and fluency in coding in their chosen tech stack before gradually being given more responsibility as they grow as professionals. A apprentice in any field, a team may bring in a junior developer in a support role to facilitate their development into a mid-level developer.

Geographical location can effect the average salary of the software developer, higher wage economies earning sometimes considerably more than similarly qualified and experienced ones based in nearshore and offshore locations.

The gap is narrowing down as remote work is becoming command and highly skilled seniors are in enough negotiating position that their physical location has far less importance.

The sites for checking the salaries according to their locations are:

🍁How to become a Software Developer

The most common route to become a software developer is to study for a computer science degree to gain some foundation and programming then specialize in a particular technology stack.

Lots of software developers come from other disciplines like arts and social science. There is no stopping to code. There are also several quality and free self-paced courses that offers plenty of knowledge. Some famous sites are

Thanks for reading, if you have any doubts about anything. Write down in the comments, I'll surely answer them.🎉🎊

Did you find this article valuable?

Support Sagar Medtiya by becoming a sponsor. Any amount is appreciated!